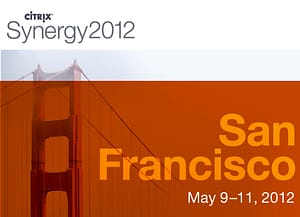 This past week, I had the privilege of attending Citrix Synergy 2012 in San Francisco, California.  My intent was to explore Citrix’s strategy of mobile and cloud-based solutions while presenting the case for cloud monitoring at CloudStack’s Build a Cloud Day.  This was my first Synergy, and while I had relatively low expectations, I was excited by Citrix’s vision, solutions, and roadmap.

Synergy cleared-up one of my biggest questions for CloudStack; what is the commercial strategy?  Mark Templeton, Citrix CEO, wasted no time in Wednesday’s keynote to announce Citrix CloudPlatform powered by Apache CloudStack.  Clearly Citrix has learned from their past dealings within open source, and they are now orchestrating, pun intended, a masterful open source and commercial strategy.

Inevitably, each time I discussed CloudStack, the topic of OpenStack reared its head.  It’s simply impossible to escape the hype of OpenStack powered by some of the largest entities in the world; namely, Rackspace, NASA, Dell, HP, IBM, Red Hat, and more.   However, OpenStack and their commercializers should take note of what’s going on at Citrix.

While OpenStack is a wonderful collection of projects (no one can deny the greatness of Swift), it also has a wide range of maturity concerns.  In fact, many conversations centered on the reported development efforts at both Rackspace and HP needed to get OpenStack into production.  Large service providers and cloud providers may have the resources needed to develop, maintain, and extend an OpenStack deployment, but what about the rest of us? Most worrisome may be the notion of OpenStack fragmentation or forks that are necessary for these providers to differentiate themselves from each other. Furthermore, the confusion around what OpenStack is and what it does was palpable.

Meanwhile, CloudStack, by its very nature, is a bit more mature than OpenStack.  Look no further than customers like Edmunds, Datapipe, and Zynga to legitimize this claim. These are real customers generating real revenue or other benefits using CloudStack in deployment.  Additionally, within the last month or so, CloudStack is building an impressive ASF ecosystem.

In the end, it will come down to the OpenStack Foundation vs. Apache Software Foundation and OpenStack’s Commercializers vs. Citrix.  From the friendly confines of the open source world, OpenStack and CloudStack certainly will be able to get-a-long and collaborate.  However, the same cannot be said about Citrix who will need to aggressively market and defend CloudPlatform against OpenStack powered deployments.

OpenStack has done a wonderful job of promoting themselves as the most important open source project of our generation.  On the other hand, Citrix is in an enviable position of a cohesive commercial solution and strategy that is in place and available today.

Although Citrix is careful not to engage in a war with OpenStack, clearly these two projects are vying for the same market and customers.  Tell me what you think. Who’s your money on?  Can two survive?  I’ll tell you if you tell me!