Home > Blog > The Modern Monitoring Mullet: Business Intelligence in the Front, Machine Learning Party in the Back 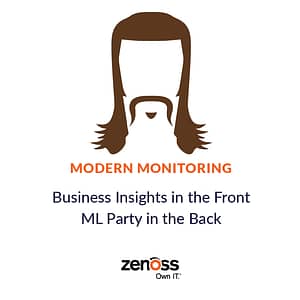 According to the Oxford English Dictionary, the term mullet was "apparently coined, and certainly popularized, by U.S. hip-hop group the Beastie Boys," who used "mullet" and "mullet head" as epithets in their 1994 song "Mullet Head." But the term "mullet head" also appears in the 1967 film "Cool Hand Luke." And the term "mullet head" was also used by Mark Twain in his novel "Adventures of Huckleberry Finn," first published in 1885.

Regardless of its origin, the term "mullet head" had previously been used to refer to a person of dubious intelligence. Somewhere along the way, "mullet" came to be the popular classification of a hairstyle in which the hair is short in the front but long in the back. Thus, it has come to commonly be described as "business in the front, party in the back."

We think this is an appropriate(/fun) characterization of a modern monitoring solution. The front is the part in full view of the audience — the part with which the end users are engaged. It's quiet, like a library, and helpful, like a librarian. In this area of monitoring, the dress code is bow ties and smart pants. This is the "business end" — it should be all about the business. This is where you find intelligent dashboards that not only convey the health of everything being monitored but also the business implications of that underlying health. Intelligent dashboards show what's powering the mission-critical applications and identify risks so they can be mitigated.

The back, on the other hand, is where the party is. It’s where your cousin Eddie likes to hang out. It's organized chaos that is not meant for consumption by the masses. In the context of modern monitoring, it's machine learning algorithms like K-Means, Word2Vec, ISO Forest, Neural Structured Learning, and LSTM. You might find them doing keg stands while furiously analyzing ludicrous volumes of data at a mind-blowing pace, producing insights that feed the business end. "For what?" you ask. For use cases covering anomaly detection, event clustering, event classification, predictive analytics, capacity planning, chatbots, natural language interaction and more. As with real mullets, it’s the party in the back that’s giving life to the business in the front.

Zenoss Cloud is the pioneer of modern monitoring mullets — the leading AI-driven full-stack monitoring platform that uniquely enables the emergence of context for preventing service disruptions in complex, modern IT environments. Zenoss Cloud leverages the most powerful machine learning and real-time analytics to give companies the ability to scale and adapt to the changing needs of their businesses. Learn more about Zenoss Cloud.

I doubt many of you made it through this post without thinking, "Maybe I should grow a mullet." Well, what better time would there be than during COVID-19? You may never have another opportunity like this. You can stride through each workweek emboldened by guaranteed Zoom frontal meetings, with no chance of someone sneaking around behind you to catch a glimpse of your secret party. I say do it — or at least just take a minute to mullet over.