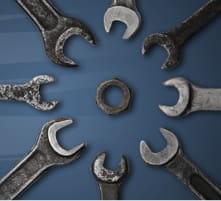 Until a few weeks ago, I viewed VCE’s Vblock as the Bentley of converged infrastructure. And in the recent webinar with Zenoss’ Kent Erickson and VCE’s Jeramiah Dooley, Converged Infrastructure and Management Lets IT Focus on Service, I mistakenly thought that VCE, the partnership behind Vblock, stood for “VMware, Cisco, EMC,” rather than the more inclusive “Virtualized Computing Environment,” referenced in the webinar.

Plenty of IT departments at small businesses (SMBs) make use of Cisco networking or VMware virtualization solutions. But the combination of those two market leaders with EMC of storage fame, seemed too rich an addition for the average SMB IT shop that has to balance supporting its current, usually heterogeneous infrastructure with other initiatives.

So halfway through this webinar, an attendee finally asked the sort of question I had hoped to hear:

My boss says only companies making more than $100 million in revenue annually really buy Vblock. Is that true?

Surprisingly to me, Jeramiah fessed up that up until recently, the attendee’s boss was correct:

Traditionally, if you looked at 300s and 700s, they were very clearly targeted at the large enterprises [whose] people were yelling the most for driving operational efficiency in its space. They got biggest bang for buck simply because of the size of those infrastructures.

But about a month ago, VCE made a big announcement for SMBs. It expanded its Vblock series to include two smaller, less expensive new models. Jeramiah said that while a lot of larger enterprises will use the newly released Vblock 100 and 200 models to handle remote-office and branch-office workloads, VCE is “specifically targeting” these 100s and 200s to smaller enterprises that need storage, network, and compute capabilities to run POS applications, back-office applications, and other things but that don’t need multiple cabinets of gear to do so.

Still, even if Vblock’s 100 and 200 systems are a fraction of the cost of their bigger siblings, why would you, the head of an SMB IT department, advocate for one? Most likely, you already have some form of virtualization, networking, and storage working in your data center, so why subject yourself to the ridicule of your CFO for some big black box from a blue-chip partnership?

The Value of Lowering Risk

The biggest problem with home-grown “V-C-something like E” infrastructure seems to be that element of risk involved whenever you need to update or troubleshoot an aspect of it. Jeremiah explained:

When you build your own infrastructure, [the] biggest risk usually is change management. For example, you’re going to upgrade your HBA but have no idea what it’s going to do, so you either build a separate infrastructure to test it or do it 2 AM on a Saturday and hope nobody notices. Or you don’t do it [and] now risk downtime [because] waiting for something to fail was less risky than attempting to upgrade it.

But unlike a home-grown “V-C-something like E” configuration, all Vblocks, regardless of model are vetted configurations have gone through thousands of hours of testing before they get sent to your data center. And every Vblock includes what Jeramiah called a “release configuration management matrix,” that tells users every version of the software and firmware being used within this structure. This matrix is updated quarterly, so that you always know which updates will work together.

Jeramiah and Kent both pointed out that some infrastructure management costs are unavoidable. Areas like staffing, facilities and power costs, and the recurring licensing of certain applications won’t be eliminated with a Vblock. But the ability to lower risk because the various components making up a given Vblock are well integrated and compatible with one another has the potential to dramatically lower your costs of operations.

But to truly take advantage of any Vblock installation, you need to modify, if not ditch, IT silos for a horizontal operations model – or what Kent called “converged operations.” And that’s one area where I think SMBs have the jump on the big boys.

But the average SMB IT group can’t afford to work in silos because they simply don’t have the luxury to hire storage specialists or networking engineers. You may know more about application development than the other guys on your four-person IT team, but ultimately, the four of you share the same IT foxhole. And if you guys already can’t work together, well, I’ll say a prayer for you.

So in most cases, SMBs already have an advantage over larger enterprises just in the manner their IT staffs are organized. Nevertheless, Vblocks are complex, so how do you go about monitoring all this infrastructure without losing your mind?

As for monitoring tools, well, this is a Zenoss blog, so yes, I’m recommending Zenoss Service Dynamics as your primary monitoring tool. First off, ZSD unifies your Vblock infrastructure monitoring with the rest of your infrastructure, be it physical, virtual, or cloud. And you can deploy automated, repeatable processes where you can set service-provisioning thresholds that align with your business needs. Finally, you also get context for your data, so that you don’t suffer through that elephant parable, where your colleagues can only see a problem from a limited perspective.

I recommend Kent’s and Jeramiah’s webinar for those of you working at smaller enterprises to get a broader overview of the challenges converged infrastructures like Vblock are designed to overcome, along with information about what changes need to happen to reap the full benefits (and make your CFO do a jig). But just know, SMBs, that you can handle the big black Vblock – and better, you have the opportunity to really leverage it more quickly – and use your time on this planet (and your savings) being more innovative & making a bigger difference for your business.