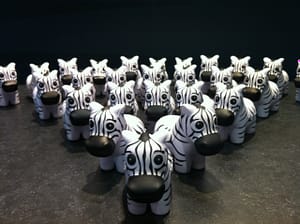 Every Friday we like to highlight some of our favorite posts on Cloud Computing, service orientated infrastructure, DevOps, Big Data, and anything else that grabbed our attention over the week. Here are some great articles from the week of January 2nd that are worth taking a look at. Enjoy!

Worldwide IT spending growth is expected to grow 3.7 percent in 2012, a slowdown from the 6.9 percent growth in 2011, according to a new forecast from Gartner.

This Week in Cloud: Economics with Cost Monitoring, Open-Source Software by Maria Deutscher

Cost efficiency and high utilization belong to the list of the top drivers behind enterprise cloud migration, so this area has naturally not been left untapped.  Two different companies have announced updates in this space throughout the past week, including Cloudability.

Abusing the word "free" in software: what's really free in the Google market and in Ubuntu's market? by Tony Mobily

I am becoming more and more convinced that the real thread to free software …is contempt. Proprietary software is a competitor, but not a real threat. Proprietary software cannot really kill free software: no matter how many law suits you start, how many patents you file, how many pre-installed versions of Windows you have, common sense will always win. Contempt, however, the the real danger.

Thinking About the Cloud and Saas? Here’s What You Need to Know by John Zappe

Thinking of heading to the cloud in 2012? Everyone seems to be, including some of the biggest HR vendors in the world. Just a few weeks ago, when SAP snapped up SuccessFactors, the buzz was all about the cloud. A similar buzz ensued when Oracle bought RightNow Technologies.

Two Events That “Clouded” Our Thinking In 2011 by Krishnan Subramanian

2011 is long gone and I should have done this post last week. However, I still think it is relevant to highlight some changes in our thinking about the cloud that happened due to events in 2011. Whether many agree with me or not, I see 2011 as a year where cloud computing moved from hype phase to something which even enterprises started taking seriously.

As always, storage remains an integral part of the Cloud in 2012 with a number of storage start-ups that you should an eye on. With big data set to become even bigger this new year you can see some Hadoop regulars in our list along with some other new mentions.

Only a few years ago, cloud computing didn't exist. Or rather, it existed by a dozen other names--such as virtualization, managed hosting, or simply The Internet. Today, it's the must-have feature of every product or service, from mobile phones to cameras to TVs.

Much has been written about the U.S. government’s plan to shutter 1,200 data centers. There’s been considerably less chatter about the fact that some of the remaining, revamped federal data centers are now leasing out excess capacity to other government agencies.

A handful of 2012 cloud resolutions by George Hulme

Few would argue that 2012 won’t be a significant year for cloud computing. This is especially true as an increasing number of organizations move more data and business-critical workloads to cloud - their expectations will begin to match reality. What do I mean? I mean that enterprises and mid-sized businesses are going to learn that as they move to cloud their old IT challenges don’t go away, in fact they are often amplified.

How Green is the Cloud Really? by Pam Baker

Greenpeace makes no bones over rattling closeted skeletons in manufacturer’s green claims. Whatever the agency finds, it exposes, and whatever excuse manufacturers offer is never excused... This is certainly the case in the debate on whether the cloud or on-premise data centers are the cleanest and greenest choice.

I've been working on Enterprise Cloud Strategy and in the course of this work identified some interesting and non-obvious opportunities in the Cloud.

E-Commerce News: Cloud Computing: 10 Things to Remember When Reaching for the Cloud by Richard Taggart

There are important legal, security and business issues to keep in mind before implementing a cloud computing plan, such as data loss prevention, vendor policies, third-party security and relevant certifications. Weighing these issues at the onset will help you avoid potential problems once you select a vendor and begin deployment.

10 IT Shifts In 2012: Exclusive Research by Art Wittmann

When an InformationWeek Research trending survey shows a 10% or 20% year-over-year shift (or more), I take notice. I do the same when a much-hyped tech barely manages to squeak up five points in 12 or 18 months. So if you're tired of end-of-year punditry backed up by nothing but speculation, take a look at these enterprise IT trends--and the hard data behind them from our research.