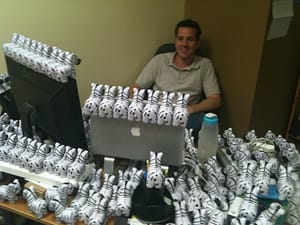 Every Friday we like to highlight some of our favorite posts on Cloud Computing, service orientated infrastructure, DevOps, Big Data, and anything else that grabbed our attention over the week. Here are some great articles from the week of December 5th that are worth taking a look at. Enjoy!

As companies move more workloads to the cloud, DevOps, the practice where software developers actually work with the operations side of the house — becomes even more important, according to IT executives.

Adoption Of Open Source Software: The Challenges And Opportunities by Murthyraju Manthena

The hurdles faced in the adoption of open source by enterprises and the Indian Government can easily be overcome if a planned, six-step approach is followed. Open source has opened minds and provided a great amount of freedom of choice not just to organisations but to our government as well. In my view, open source has brought about a change in the way we view and adapt to technology.

Survey: Consumerization of IT a big driver to the cloud by Ted Samson

Though cost-savings is often the biggest sales pitches for embracing the cloud, 33 percent of respondents in a survey titled "CSC Cloud Usage Index," conducted by research company TNS on behalf of CSC, say they've moved cloudward primarily to keep employees connected via the various computing devices that have invaded the enterprise. Compare that to 17 percent who cited reduced costs as the impetus to enter the cloud.

Amazon: The Microsoft of the cloud by Matt Asay

Open ... and Shut Is there a cloud market, or is there an Amazon market?

This is the second installment of the two-part post I began last month on my sixth fundamental truth of corporate cloud strategy: Technology-driven business practices often circumvent government regulations, but legal and government policy standards will dictate the cloud’s success.

As businesses get ready to capitalize on emerging technology trends in 2012, cloud computing remains at the top of many companies’ lists: Fifty percent of respondents to a recent Unisys online poll said cloud computing is their top IT investment priority for 2012.

The one thing still holding back cloud computing: Server huggers? by Kevin Fogarty

When developers want to level a stand of virgin forest, the call the environmentalists who protest the destruction "tree huggers." Some did it because they just liked trees. Most were part of '70s and '80s environmental movements, which had a complex political agenda that's not always clear even yet.

And a few more noteworthy pieces...