The Emotional Pull of NoOps 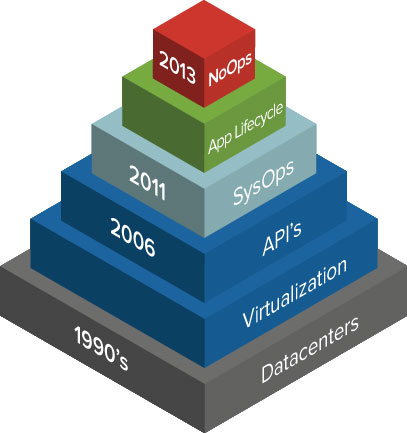 Despite my previous assessment that NoOps is a misnomer, the term seems to be gaining steam in the developer community.

A few weeks ago, GigaOM posted a story Why 2013 is the year of "NoOps" for programmers that featured an infographic from open source PaaS company AppFog delineating the progression from the old-school data centers to this NoOps nirvana.

This story led to meoldy of tweets, several blog posts and a CloudU group discussion titled, Cloud moves towards a NoOps world. The discussion was lively and often heated, and much of it seemed to boil down to semantics. One person’s #NoOps is another person’s #DevOps or #AppOps, and so forth.

But regardless of where you stand amid all this, the push to use NoOps as a term separate from DevOps clearly has an emotional component. Forrester analyst Mike Gualtieri in his previously discussed post, I Don’t Want DevOps. I Want NoOps, makes a comment I had initially passed over:

The last thing many application developers want to do is have a sit-down with the ops guys.

In other words, developers are effing sick of operations people. Adrian Cockcroft, cloud architect at Netflix and a proponent of NoOps, tweeted last June:

for us #NoOps is more of a solution than a problem, hard to teach old dogs new tricks, reboot from scratch.

So why do so many developers have such distaste for their ops brethren?

Dan Taylor, new technologies developer at The Steel Construction Institute and creator and writer of the blog System Volume, started out as a Ops guy before going to the developer side. In his post, DevOps and me, he describes his feelings toward developers when he took his first sysadmin job:

Just a little over 6 years ago I took on my first real Systems Administration role, its for the company where I work today as a developer (emphasis mine) … In my early years I was firmly in the SysAdmin camp when it came to infrastructure issues and deploying the “Stuff” that the developers threw my way …[T]here was no way that I was happy to give any developers access to my servers, not even to upload files.

Developers were stinky horrid creatures who only had one aim in life, destroy all the systems!

No wonder the average developer is saying, Screw these guys. I’m going with a PaaS solution…

But most organizations, except for maybe startups, can’t discard operations, no matter how much the developers wish for it. At the same time, this palpable frustration indicates the importance of making sure developers have an equal say in the DevOps conversation.

As SiliconANGLE editor Alex Williams writes in his post NoOps - A Big Lie or a Political Shift?

Operations is everyone's responsibility. Just as everyone has a stake in development. Forget the feuds, the infrastructure has to work. That's why NoOps is a lie but also represents a distinct political shift.

Image via the AppFog Blog