Home > Blog > Good Things (Like IT Transitions) Come in Threes

We all know IT organizations are all undergoing major transitions, but for many teams, it’s happening without conscious thought and planning.

One way to see this happening is to look for common problems. They exist, and I’ll review those later. Let’s look at these three emerging functions.

For people who thrive on uncertainty and love to fail fast this is great news. You can recognize the new app dev function because they do only enough planning to get through the week, and look, it’s another release! Yep, it’s the Agile development process.

Simon Wardley calls these people Pioneers - they charge off into the uncharted wilderness.

Unlike the past, they can now rely on commodity resources - public cloud and converged infrastructures - and have no need to think about building their own.

IT Services is a product, not a commodity. Just like Salesforce, it needs to be customized to support each organization’s needs, but the core functions remain the same.

The key focus items for this team are built on Lean processes - eliminating waste and duplication, learning, working with the whole, building quality.

Per Wardley, we can think of these people as settlers. They build roads, put in traffic lights.

We used to think that compute, storage, virtualization, and networking were part of the IT Services product. Organizations now are regarding these resources as commodities. And just as they don’t build their own power plants or wire buildings separately for 110VAC, 240VAC, 12VDC, 48VDC, and 5VDC, they don’t worry about the small efficiency losses that come from relying on commodity computing resources.

The goal is to deliver highly reliable access to completely interchangeable computing resources. Many new organizations have abandoned the concept of building their own data center, but most likely your organization has been around for a long time and isn’t going to move everything to the cloud.

I expect you’ll be using private data center resources and cloud resources side by side for many years. But if you think of these as commodities, you’ll go a long way.

The goal here is highly reliable infrastructure delivery. You’ll use run books, cost benefit analysis, statistics, all the tools associated with Six Sigma. The people who will thrive in this environment are town planners, thinking ahead and optimizing.

I’ve spotted three common problems associated with the IT transition.

Zenoss has an important role in this transition. 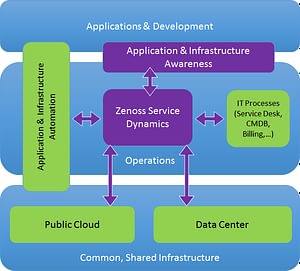 The good news for both me and you is that Zenoss can have an important role in helping you manage through this transition.

Application context, provided by development and provisioning automation, is consumed by the Zenoss Live Model. This means that developers can immediately determine whether application issues come from infrastructure or the application, even during the development process. And IT Services can focus on top business priorities first when resources are first.

Data for both public cloud and converged infrastructure are collected and analyzed using common functions. There’s no duplication of effort, and reliable data is available for statisticians. And we can grab data from all those legacy non-commodity devices until we can get rid of them, too.

With automated provisioning, application context, data from both cloud and data center, and standard integrations to other IT service functions like service desks, Zenoss software can enable IT Services to provide new-application-support-in-minutes as a product feature.

I’ll be writing more about each of these issues in the coming weeks. Meanwhile, help me focus on what’s important to you by email!