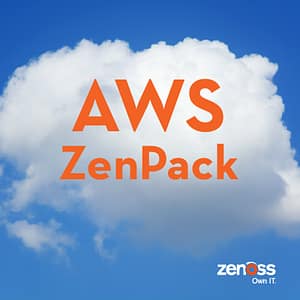 We recently launched our latest Amazon Web Services (AWS) ZenPack. The launch of a ZenPack may not seem like earth-shattering news, but this one advances key capabilities for cloud environments, which is obviously a strategic aspect of hybrid IT monitoring and analytics. This latest AWS ZenPack release expands monitoring coverage for Zenoss Service Dynamics to include Amazon’s Relational Database Service (RDS) and CloudFormation templates. In addition, the AWS 3.0 ZenPack provides insight into AWS costs, giving customers the ability to quickly identify trends and intelligently track AWS spend.

The rate of adoption for public cloud offerings continues to rise across enterprises in every sector, and nowhere is that more evident than with AWS, who reported 55 percent year-over-year growth and sales of $12.2 billion for 2016.

At the recent global AWS Summit in San Francisco, the company announced that over 23,000 databases have been migrated to Amazon’s RDS since January 2016. In response to this incredible growth and increased adoption, in-depth RDS monitoring has been added as part of the Zenoss commercial AWS ZenPack.

Another key AWS feature seeing increased adoption is CloudFormation, Amazon’s provisioning and management service, which orchestrates the automated creation, update and deletion of resources, products and configuration elements within AWS.

The AWS 3.0 ZenPack models and monitors implemented CloudFormation templates to instantly give customers a complete understanding of the application stacks deployed in their AWS environment. This eliminates the burden on DevOps teams, who typically have to track changes manually to ensure accurate and up-to-date views of what is actively deployed.

In addition, the AWS 3.0 ZenPack tracks spend by region and service within an AWS implementation. Often customers who begin their evaluation of the public cloud by moving small workloads to AWS, which have relatively predictable monthly costs, find that more dynamic applications, which require resources to auto-scale by constantly spinning instances up and down, become hard to track. They lose sight of necessary resource provisioning and, consequently, monthly spend. Zenoss provides data to identify areas of high cost and predict future spend based on current, weekly or monthly trends.

Along with these features, Zenoss has added compatibility for AWS GovCloud implementations in order to accommodate government agencies who are increasingly choosing to migrate key services to AWS. Zenoss has made significant investments to ensure that AWS customers across Amazon-support regions can utilize the same market-leading, unified monitoring platform.

Hybrid IT environments are increasingly becoming the norm for businesses of all sizes. The new AWS 3.0 ZenPack provides global enterprises and service providers with even greater visibility into, and more effective capabilities for monitoring and managing, their AWS cloud-based resources alongside their traditional on-premises infrastructure.

New to ZenPacks? Here is a refresher.

ZenPacks are plug-ins that use standard APIs and protocols, including SNMP, WMI and SSH, and allow you to collect configuration information and monitor specific elements, devices or systems without agents. ZenPacks help you monitor just about anything in your environment. There are hundreds of ZenPacks available for the broadest and most flexible coverage. We make it easy for you to unify, enhance and extend your monitoring without the need to replace any existing tools. If we don’t have a ZenPack, you can easily build your own to monitor your custom systems and applications.