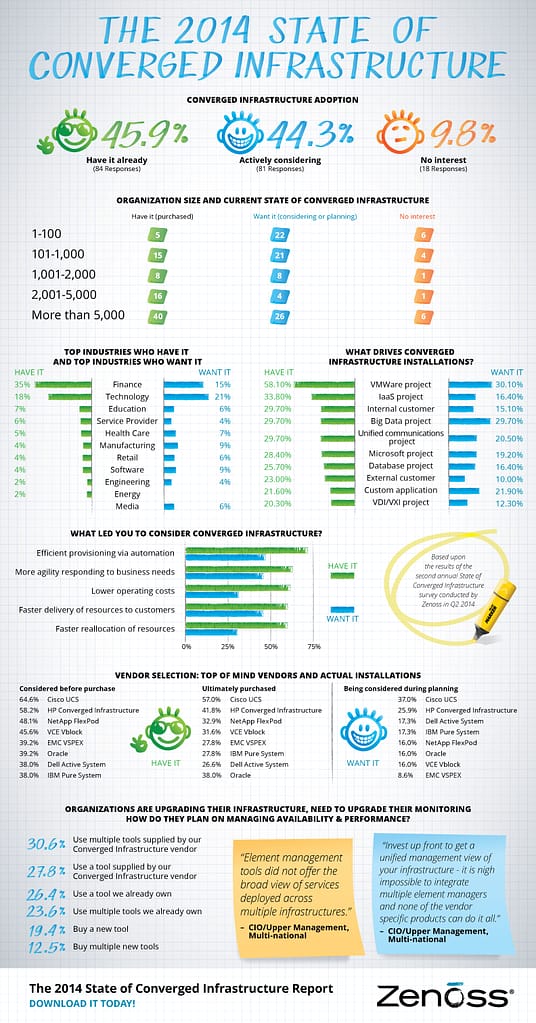 Earlier this week, Zenoss released the findings from our second annual “The State of Converged Infrastructure” report. Primarily focused on North American and multi-national organizations, 183 IT professionals responded from dozens of industries and companies large and small. The pool of respondents was a good mix C-Level executives, IT directors and managers, system administrators, server, storage, and network administrators, system architects, applications developers, and more, which means that the survey provides a pretty broad and fairly representative perspective on the state of converted infrastructure in the market.

Zenoss conducted the survey during Q2, 2014 with the goal of exploring how technology leaders were using or planning on using converged infrastructure solutions such as Cisco UCS, NetApp FlexPod, and VCE Vblock to respond to changing business needs. If you have ever had any doubts about the acceptance of converged infrastructure, this study should remove them.

Key findings from the 2014 survey include:

Organizations are still missing a key ingredient – modernizing infrastructure management
Despite making significant investments in upgrading their infrastructure, most organization are still not doing much to upgrade their tools. Many plan on continuing to use their existing tools. Others plan on buying multiple additional tools to manage their environment. We believe this is a huge miss. A study conducted by Forrester Consulting, “How Too Many Tools Can Impact Your IT Operation Efficiency”, talks about how having too many tools can drive up the operational costs and drive inefficiencies within the environment. Use the “True Cost of IT Monitoring Calculator” from Zenoss to gain some additional insight around the costs of too many tools.

If you liked this article or know of others interested in getting the latest and greatest news about the state of converged infrastructure, feel free to share this article on LinkedIn, Twitter, Google+, or Facebook. Also, don’t forget to follow our blog to get the latest news and information from Zenoss!